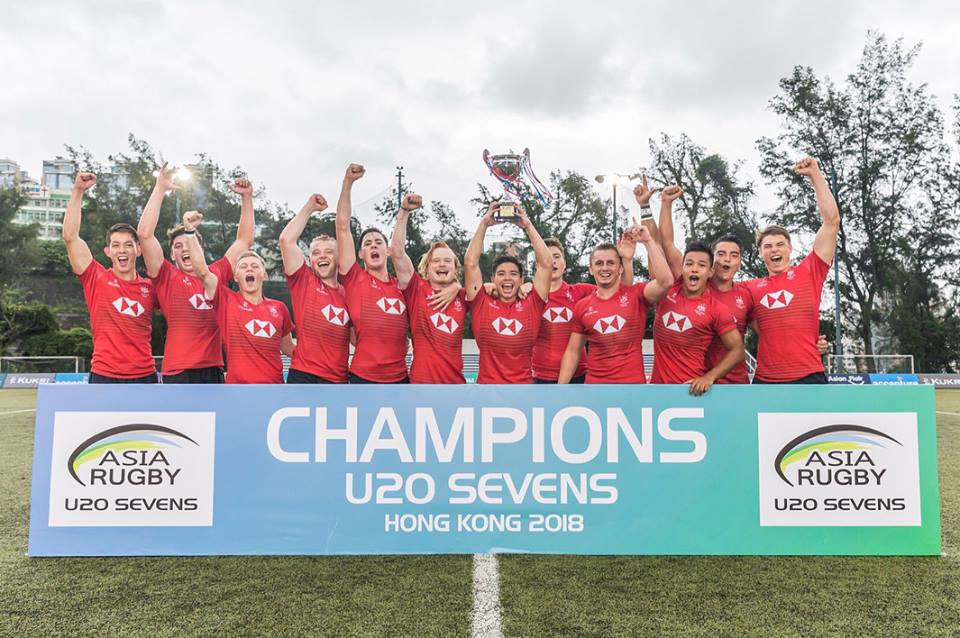 The men’s U20s captured the regional title for the fifth time in a row after Liam Doherty’s try at the buzzer gave Hong Kong a 5-0 win over South Korea, while Hong Kong’s Women’s U20s reached their first ever Asia Rugby U20s Sevens cup final before bowing out to defending champions China, 33-0.

The men maintained their mastery of junior sevens with an unbeaten run in the tournament, during which they conceded only a single try – to Korea in last night’s pool match, which Hong Kong won 19-5.

Hong Kong beat Malaysia, 36-0, to close out the pool matches this morning before dispatching Singapore in the semi final, 19-0, to set up the rematch with South Korea.

In a pulsating final, the two sides played each other to a standstill across 14 scoreless minutes of end-to-end sevens action in a performance that bodes well for the sevens future of both Unions.

South Korea had the lion’s share of possession in the match and put Hong Kong on the defence from the kick-off.

But the defence was watertight and Hong Kong showed poise under pressure – and a dangerous edge, as they nearly scored from their first attack of the game when Paul Altier stepped his way out of a tackle and put Matthew Wyatt into space on the wing. Wyatt’s try-line dash was called back after the assistant referee flagged an infraction up field.

The intensity spiked as the seconds ticked away without a score and in the second half the Koreans found themselves on the wrong side of controlled aggression as they collected the first of two yellow cards for a dangerous tackle. Now it was the visitors turn to dig in defensively and Korea responded magnificently, bravely keeping Hong Kong off the board in the final minutes as the game looked to be headed to extra time.

“When we had the man advantage I think we were a bit too desperate and it backfired on us,” said Fan.

With the game looking like it was heading to extra time Liam Doherty broke out of a tackle on the far touchline to score the match-winner – his fourth try of the tournament – at the hooter. Altier’s conversion attempt hit the post but Hong Kong had done enough to retain the title.

“Korea played really well, but we kept our structure and were able to take our chances when we got them to steal victory at the end. I think that our ability to withstand all of their pressure shows that our fitness training really paid off in this tournament,” he added.

“It’s been a good experience for us. We had the opportunity to get more sevens exposure for some new players and I think it has been a useful stepping stone to help our more experienced players break into the senior squad.

“Hopefully we can keep the main group together for next year. The skill level is good and we can keep improving. More exposure in league rugby will also help polish them and make them stronger,” said Fan.

In the women’s competition, Hong Kong ran into a China steamroller twice en route to their first ever appearance in an Asia Rugby U20s Sevens final.

Hong Kong dropped the final pool match against China in a lacklustre 28-0 loss this morning, before bouncing back to beat Malaysia 15-0 to set the stage for a rematch with China in the Cup final.

As they have done all weekend, coach Sam Feausi’s squad grew game by game and with the partisan crowd firmly behind them, Hong Kong dominated China for the opening five minutes of play.

Hong Kong missed out on three opportunities to score as they were camped out on the Chinese try-line for long stretches of the first half. But Hong Kong were unable to keep China penned in their half forever and eventually the defending champions broke away for an 80-metre try against the run of play as the half-time buzzer sounded.

That try proved demoralising for Hong Kong, as did China’s early score to open the second half. Soon Hong Kong heads had dropped as China found cruise control to add four more tries and run out 33-0 winners.  Hong Kong’s result moves them up a spot into second place on the Asian rankings and coach Sam Feausi was delighted with her side’s accomplishments.

“I’m proud of the team. It was a huge achievement for us to reach a cup final for the first time at this level. That was one of our objectives for the tournament, as was beating China, so we had didn’t achieve everything we wanted but the girls now have a taste of what is required at this level.

“There is a lot of potential in this squad with seven or eight of the girls eligible to play next year, so we have 12 months to work on closing that gap with China.

“It is up to the girls to keep putting the work in, but they have had some great examples from our departing senior players like Grace Hood and Chloe Chan, who have been giving up their summers every year for the last three years to come back and play with us,” she added.