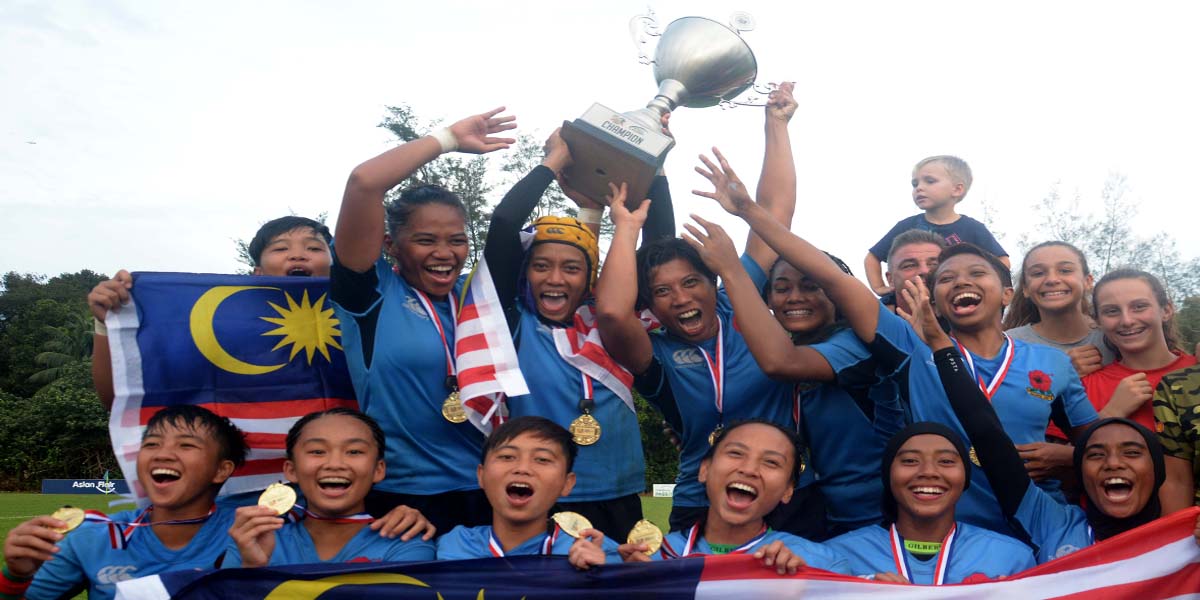 In what was an upset, Malaysia beat the Philippines 10-7 in an exciting final. Malaysia Rugby coach Nik Ismade spoke about Malaysia win.
“We are extremely happy to have won the tournament, we are also surprised and can’t believe we have actually won the final.

The girls performed to their full potential and I am very proud of them all. Philippines are a good side and they played extremely well throughout the tournament.

For our team, eleven of the players were new caps, most of them come from the Get Into Rugby program, with only one of the players from the bronze medal-winning SEA Games team.

The girls are very excited about the Prospect of playing in the top tier, I look forward to going back and discussing with Malaysia Rugby about the future of these girls and the women’s program, we need to make a proper plan and pathway so that we can compete at the higher level. These girls need the Union and Government’s support.”

Philippines captain Helena Indigne commented  “The final match was very tough as we were expecting it to be. We played our hearts and minds out. It just happens that we did not get the final trophy, but I believe our team did everything we could as individuals and as a team to get to where we are as a team and we are very grateful.

Our preparation for the tournament started a long time ago, we started early on, in the year. A lot of the players have moved to Manila, just so they can train every day, this has helped us get together as a team.

Moving forward we are planning to do even more of this team stuff and also on the field as well so that we know how each of us moves, which will aid us in playing better together.

We were very happy that a lot of teams were in this tournament. Last year there were only 6 or 7 teams, this proves that Women’s Rugby is really growing in Asia and we are very happy about that.

And we are also very happy to see that all the teams did so well, even teams like (debutants) Brunei, who are new to rugby really improved their game, and it means that Women’s Rugby is really strong in Asia.” Rugby India Won the plate championship Beating Lao in the plate final 31-10 , Indian winger Sweety KUMARI ended the tournament as the Highest try scorer with a total of 10 Tries.  The 7s Action will move to India as Rugby India will host the Asia Rugby U18 Girls tournament from 26th-28th October which will feature 12 teams. Asia Rugby Exco and World Rugby Council member Ada Milby Gave Malaysia the winning Trophy and commented about the significance of the ARWST and the  important part it plays in the pathway for Women rugby in Asia  “The Asia Rugby Women’s Sevens Trophy is a significant part of our development in the women’s game and also an important part of the pathway for the teams.”