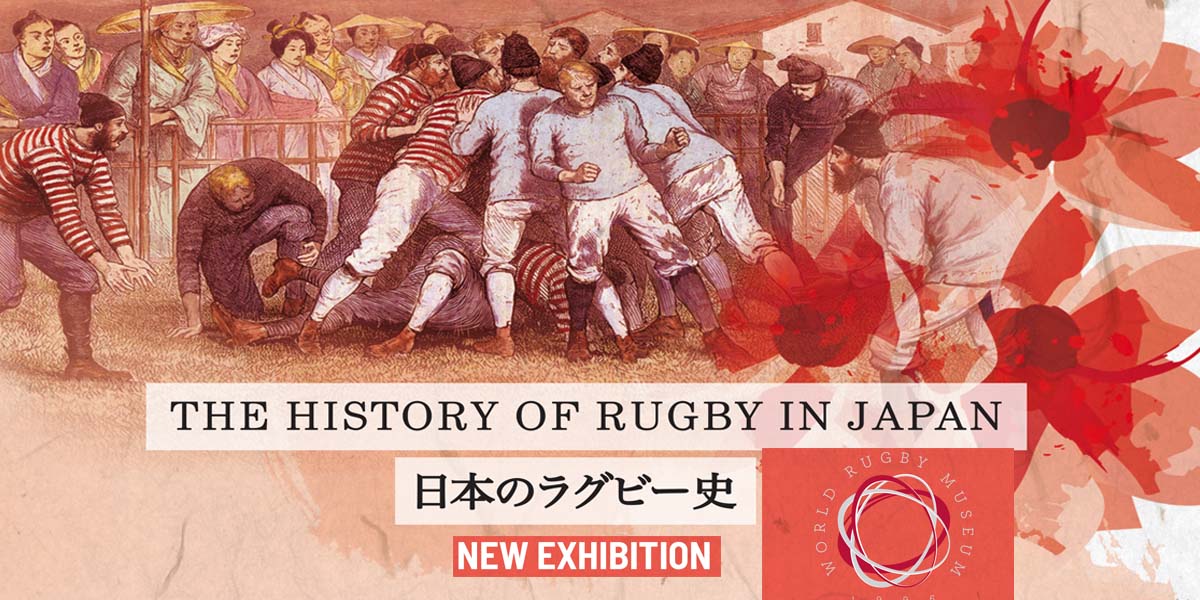 As the rugby world turns towards the land of the rising sun in anticipation of Asia’s first Rugby World Cup, the World Rugby Museum is hosting a new special exhibition ‘Brave Blossoms: the History of Rugby in Japan’. The Reg Clark (Rhino Rugby ) officially opened the Exhibition in which he elegantly gave a  speech in Japanese which was appreciated by all the Japanese dignitaries in attendance. MR Clark Commented on what an honour it was to open the exhibition and thanked world Rugby Museum Curator Phil McGowan for his work. World Rugby Museum Curator Phil McGowan spoke about how in the 1930s the Japan national team emblem had three cherry blossom buds, two of which were open, one of which was shut.  it was planned that the third blossom would open when the team played England for the first time.  As the fixture proved elusive the third blossom was finally opened in 1952 when Japan played Oxford University in front of Prince Chichibu in Osaka.

Saturday Japan will take on England for the first time in an international test so, in reality, the third bud will now officially open. the exhibition Features new research and objects drawn from around the world, this special exhibition tells the story of how Japan transitioned from the late Edo to early Meiji period and the role that rugby union played in establishing educational and diplomatic links, initially between Japan and Great Britain and then the wider sporting world.

It celebrates the achievements of a Japanese Prince and shows how rugby helped Japan rebuild in the post-War period. It will show how in the modern-era Japan has pioneered a new way of playing rugby with consequences far beyond its shores, culminating in seismic victories against tier-one opposition from 1968 to 2015.

Finally it will look to the future and the 2019 Rugby World Cup which promises to be a tournament like no other that has gone before.

‘The Japan 2019 Rugby World Cup will represent the culmination of a project embarked upon by two friends at Cambridge and then Keio Universities 120 years ago. The history of rugby in Japan is a fascinating story. Our exhibition will demonstrate how Japan embraced a traditional sport from the west before making it their own’.

Among the dignitaries present at the opening  was Tadashi Okamura- President of JRFU, Akira Shimazu- CEO Japan 2019 and  Peter Wheeler- Vice-President of RFU/41 caps England ‘Having a successful world cup and a successful national team gives kids a dream. They can play international sport at the highest level and it doesn’t matter what size you are. That’s really important for the future of Japanese Rugby’.

The exhibition opens to the public over the weekend of the 17th and 18th November, when England will take on Japan for the first time in a fully representative international test-match at Twickenham. It will run until the autumn of 2019.