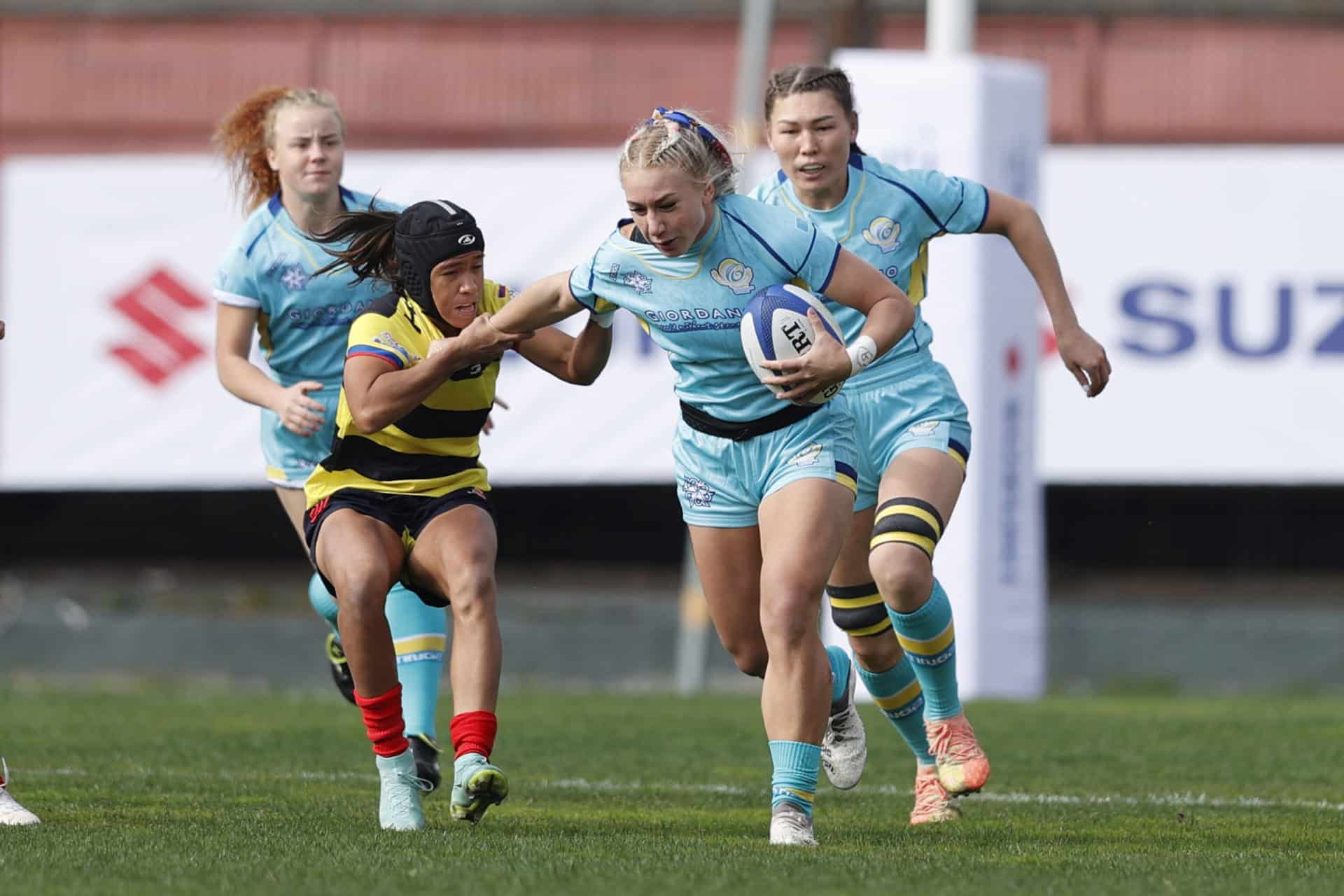 There was no shortage of drama, determination and scintillating skill on day one of the World Rugby Sevens Challenger Series 2022 in Santiago, Chile.

With the prize of promotion to the HSBC World Rugby Sevens Series 2023 at stake, the 24 competing teams played with passion and commitment on the opening day of the three day competition at Estadio Santa Laura in view of the majestic Andes mountain range.

In the women’s tournament Kenya, Japan, Poland and Kazakhstan secured a pair of victories and will be looking ahead to Saturday’s quarter-finals.

Kazakhstan were impressive throughout, convincingly beating Colombia 22-5, and Mexico 24-5. Japan, who are looking to return to the World Series as a core team, beat Mexico 44-5 and Colombia 21-12.

Poland were the day’s top scorers with a 71-0 thrashing of Papua New Guinea in Pool E, which followed their earlier 36-5 victory over Argentina, who bounced back to beat Belgium 15-10 to keep their quarter-final hopes alive.

Kenya took charge of Pool D with a hard fought 17-15 win over China, followed by a 31-5 defeat of South Africa. China  and will face South Africa in a crucial final pool match on Saturday morning. The men’s competition saw Tonga and Hong Kong secure their progress to Saturday’s quarter-finals by winning both of their matches against Jamaica and Zimbabwe in Pool B.

Germany are in pole position in Pool C with a perfect win record after beating Lithuania and overcoming Uganda 17-14 in a pulsating encounter thanks to a hattrick of tries from Jack Hunt.

Hosts Chile were cheered to a 24-7 victory over Papua New Guinea in the last match of the day to build upon their earlier 19-14 win over Georgia as they look sure to progress to the quarter-finals.

Chile men’s captain Joaquin Huici said: “The first game was a tough one against Georgia and it was the same against Papua New Guinea, although we managed to control the game. Tomorrow we face Korea in our last pool match, we will get some rest and focus on them.”

Play begins on Saturday 13 August at 09:28 local time (GMT-4) when Colombia and Mexico take to the pitch to kick-off an action-packed day of international rugby sevens, with the quarter-finals set to take place from 17:00 to 20:58. The all-important finals will take place on Sunday with the women at 18:47, followed by the men at 19:20.

The Challenger Series was introduced in 2020 to boost rugby sevens’ development across the globe and provide a pathway for promotion to the HSBC World Rugby Sevens Series.

The global event sees teams from all six World Rugby regions represented in a competition format that replicates the Olympic Games with three pools of four teams.

The top two from each pool along with the two best third-placed teams will qualify for the quarter-finals, before the semi-finals and final will decide the tournament winners on Sunday.

There is plenty of top class experience in the line-up as nine men’s teams have appeared on the HSBC World Rugby Sevens Series previously as invitational teams. Meanwhile China and Japan have both been core teams on the women’s Series, while another eight women’s teams have played at least once in the Series.

Five of the women’s teams and nine men’s teams competing in Chile have also qualified for Rugby World Cup Sevens 2022 where they will play in front of an anticipated crowd of 165,000 fans across three days in Cape Town on 9-11 September.

Fans around the world can watch every match of the World Rugby Sevens Challenger Series live on www.world.rugby, while in South America the action will be live streamed on ESPN’s Star+ platform.