Mongolian Rugby Football Union was established in 2003 by the initiation from one of Mongolian famous wrestlers, Mr.Tserenpuntsag Tsedendamba.

Mongolian rugby having started with occasional social matches between locals and expats has grown to become one of the most exciting team sports in the country.

In a country where the temperature can range from -35 to +35 degrees throughout the year and Ulaanbaatar (Mongolian capital) is the coldest capital city in the world, developing an outdoor team sport is a tough and a unique challenge.

On top of that, the Mongolian sport culture is predominantly based on individual sports such as wrestling (Judo, freestyle, National etc.), boxing, archery and others. It is only recently when Mongolian team sports are beginning to thrive and achieve success with increased access to various infrastructures.

Rugby is still a new sport to most local especially as population in the rural areas mostly practice individual sports such as the National wrestling. Mongolian RFU has achieved numerous milestones in recent years having won the Division 4 Championship of the Asian Rugby Championship in 2014, having signed and included rugby in the Mongolian Armed Forces Sport programme from 2018. Also with Rugby World Cup 2019 and Olympics 2020 to be held in Japan, these events will be major events that will draw many sport lovers to rugby. Currently, Mongolian RFU has a successful and competitive age grade and National championship tournaments, which attracts young and upcoming players. Moreover, the access to Get Into Rugby programme has been another highly successful programme where by autumn of 2016 the amount of participants surpassed 7000.

Mongolian RFU is now working towards sustaining the growth level and to reach wider population in the rural areas of the country. Despite the harsh conditions in which we must grow the sport, for Mongolians rugby is highly suitable due to the lifestyle of the people, the passion for wrestling and combat sports. The World Rugby Council has approved the recommendation of the Executive and Regional Committees to elevate the Mongolian Rugby Football Union (MRFU) ... From snow to Almaty, Mongolia blend experience and youth for Central competition

Mongolia rugby will take on Kazakhstan on Wednesday in the second match of the Asia Rugby Championship Division III Central competition. Despite ... In addition to the launch of the IMPACT Beyond 2019 legacy programme for Rugby World Cup 2019 at the Asia Rugby General Assembly in Mongolia, and in ... Inspiring sustainable rugby growth and attracting one million new participants in Asia is the aim of the Impact Beyond 2019 programme, which was ... 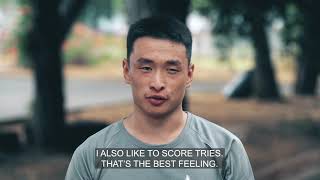