In the last couple of years, Jordan Rugby has been part of various accomplishments, and one of these major achievements was the beginning of the Jordanian Women’s National Rugby team, which was founded in 2019. Ever since then, Jordanian female Rugby players have been greatly involved in the growth of the sport in Jordan.

Mais Khoury, a National Team Rugby player in Jordan, has been a major catalyst towards female empowerment in Jordan Rugby, as she played a significant role in creating new beginnings for female Rugby coaches in Jordan.

She started her coaching journey in 2019, where she got the chance to work with a local NGO that aimed at bringing rural and city communities closer through sports and education.

She also worked in Al-Za’atari refugee camp which is located in the northern area of Jordan.

“Rugby is a huge part of my life and I’ve always been interested in growing it amongst my society, and this is the main reason behind why I decided to become a coach. Giving others the opportunity to fall in love with this sport is what kept me going.”

Mais emphasized on how unique and overwhelming this experience has been for her, as coaching children in rural areas was a brand-new venture in her Rugby career.

Mais found this experience to be quite humbling as well, as being a coach in a rural area in Jordan has helped her appreciate the simple values in life, since the young boys constantly showed compassion towards their families and brotherhood; “Seeing the way they lived their lives in a very simple way away from all the luxuries we have taught me that there is more to life than our everyday problems. I learned the importance of family and brotherhood from them.”

What makes Mais’ experience particularly exceptional is the fact that she breaks the general stereotypes associated with having females taking leading roles, not only in the sports community, but in the Jordanian society in general.

Although having a female leading figure is not a common conception in rural areas in Jordan, Mais managed to take the lead and give the young Rugby players a new perspective on females in sports, especially in a sport that involves a great amount of physicality and strength, which is not quite common for females to partake in here in Jordan. “One of the biggest challenges I faced when I was coaching in rural areas was being a female leader, because rural communities are not used to having women outside their household, and coaching 13-16-year-old boys who grew up not used to seeing women as leaders was a new idea to them.”

Aside from competently fulfilling her position as a Rugby coach, Mais also managed to give the young players a new perspective on the significant role of females in sports.

It wasn’t easy for Mais to take on the role of the coach, but she successfully managed to instill this different mindset in the young boys; “It was challenging at the time to gain their attention and respect. However, with time, their views on not only female leaders but females in sports changed, and this was a beautiful thing to witness.”

Despite the obstacles that Mais had to overcome, one of the major lessons she has attained from this experience is the true essence behind becoming a Rugby coach; “Most importantly, I learned that the values of rugby are not things we teach but things we live by.”

Mais will not end her journey here, and she will definitely continue bettering her coaching skills in the future; “I will definitely not stop here, and I will continue to coach rugby in any chance I get. I would love to receive more training on how to become a better coach, because this will help me gain more knowledge on how to deal with players and help them become professional players in the future.” 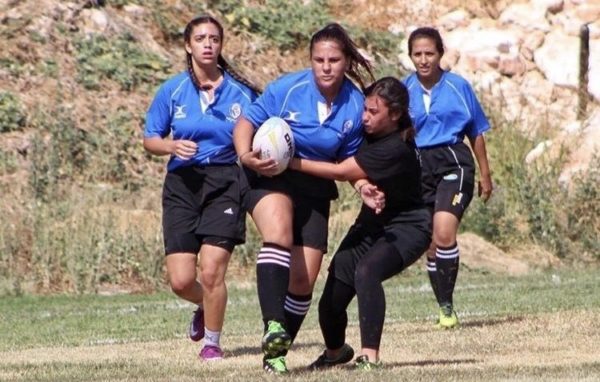 “I see great potential in many young players who have not had the chance to know what rugby is and play it, so I would love to spread it throughout my country and the world.”

Mais also hopes to involve more and more Jordanian female coaches along this path, and hopefully expand this community of resilient female Rugby coaches, as she believes that the future holds great things for female coaches in Jordan. “Women in rugby grew widely in Jordan over the past couple of years. In 2019, we proudly established the first female Rugby National team and participated in the West Asia Tournament in Qatar. Seeing this, many females started thinking of becoming coaches. We all have a passion for growing the game and taking it to different places. I believe a great future is ahead of female rugby coaches in Jordan.” About Farah A. Ghanma

Farah A. Ghanma is currently a Software Engineering freshman in Amman, Jordan. She is also a Jordanian National Team Rugby player and has been one of the first members to join the National team in 2019. Her Rugby journey began at the end of 2017, when the first female Rugby team was founded in Jordan.
Farah has taken part in various international exchange programs and opportunities, one being the Asia Rugby Invitation. She was chosen by the Jordan Rugby Union to represent Jordan in Japan in 2019, where young Rugby players from all around Asia were invited to the opening ceremony of the Rugby World Cup. This was the first time a Rugby World Cup was ever held in Asia. She has also given her first TEDx talk in 2020, where she shared and discussed her journey as a Jordanian female in STEM and Rugby.