The first game of rugby played in jordon was  about two decades ago, played by a few members of the British Army as this is typically how the game spread to the far corners of the world. Over time, as Jordanians joined in or brought back their knowledge of the game from their time being abroad; rugby started to gain popularity.

The early days saw games played on sand pitches and eventually we had mini competitions like the Prince Abdullah Trophy (later became known as the King Abdullah Trophy) where Amman Rugby F.C would take on teams from Cyprus, Lebanon, Egypt and even Fiji. Fast forward several years later and, under the guidance of Coach Duaine, the Jordan national Team was formed and took part in their first competitive match in 2010, and a year later took part in their first tournament, which they went on to win (ARC Division IV).

The JRC was formed a couple of years after that and Jordan began its ascend to where it is today: with four clubs, a rapidly growing community of players and the foundations in place for an ambitious plan to become full members of World Rugby and hopefully take part in future World Cup competitions. Unique insight into women’s rugby in Jordan Following the recent celebration of International Women’s Day, many Asian women were inspired by the ...

While many eyes will be on the first round of the Asia Rugby at the end of April, Beirut will host four teams looking to claim the 2018 ARC Division ... Jordon Rugby reports that following two tough trial matches, Jordan Rugby selectors have finalised the squad that will take on Saudi Arabia this ... The sport of rugby is coming of age in Jordan and the Jordan Rugby union has reflected on 2016 and what it calls a “remarkable year” by unveiling some ... 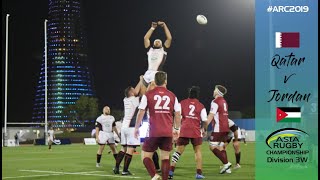