PERSATUAN RUGBY UNION INDONESIA (PRUI) or Indonesian Rugby as it is known is the organisation responsible for the management and development of Rugby Union in Indonesia. PRUI is legally registered as a sporting association in accordance with the Law governing the Republic of Indonesia.

PRUI was granted Associate Membership of the Asia Rugby in September 2004 and gained  Full Membership in November 2005 following progress made by the Union to develop Rugby.

On a local scene PRUI was recognised by Komite Olahraga Nasional Indonesia (KONI) as being the national sporting organisation responsible for the development and management of Rugby in Indonesia in August 2013.

INTRODUCTION
The  PERSATUAN RUGBY UNION INDONESIA was established in May 2004 by a small group of founding volunteers to target the development of Rugby for Indonesian Nationals. Prior to the establishment of the IRFU, Rugby had been played in Indonesia for over 30 years, however it was for most of that time a sport dominated by expatriates and the formation of the IRFU set about to change that trend

. Since May 2004, there has been a large growth in the National participation levels from junior through to senior players, coaches and match officials.
The IRFU is fully funded by generous sponsors and supporters, and it receives no financial assistance from the Indonesian Government or other sporting bodies. All monies raised by the IRFU go towards the development of Rugby for Indonesians.

The establishment of the Indonesian National 15’s Team, known as the “Rhinos” in 2006, has been one of the great success stories of the IRFU and Indonesia has proven that it can compete on the international stage.

sts.
Prior to the establishment of the IRFU in May 2004, several Rugby clubs existed in Indonesia catering only for senior players. The number of Rugby clubs has increased dramatically since the IRFU’s foundation, as has the participation of Indonesian players, coaches and match officials. If Karina Soerjanatamihardja has one grievance in life so far, it is that she was unable to fulfil her “full potential” as a rugby ... Indonesia make a return to the Asia Rugby Championship this year in the Division III East-South competition. They will host the tournament and ... Asia Rugby's commitment to growing the game across Asia got a boost from rugby sevens' recent participation in the Asian Games During the Games ... According to a press release issued by the Olympic Council of Asia (OCA) on its official website, Rugby 7s for men and women has been included in the ... 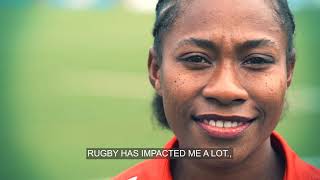 Rapid rise of rugby in Indonesia